[Breaking] PM Modi announces Rs 1000 crore Startup India Seed Fund, Prime Minister Narendra Modi announced the launch of a Rs 1,000 crore start-up fund to encourage startups. on Doordarshan (DD). During the program, the Prime Minister heard about the work of start-ups in several places in India along with Chennai, Bhopal, Ghaziabad, Sonipat. During this, he also heard the achievements of start-ups of BIMSTEC countries including Bangladesh, Bhutan, Myanmar, Nepal. 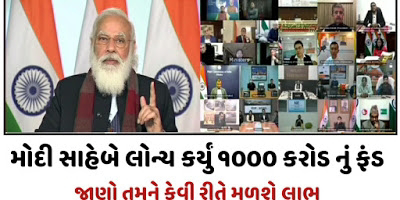 The power to change the future in startup
Modi said that given the start of startup in various fields, it can be said that they have the power to change the future. He said that the startup companies of the country have also looked for opportunities during the corona virus epidemic. PM Modi said that the start-up has changed the old trick of running on a track and has started diversity.
The event was the first start-up conclave of BIMSTEC nations. Addressing the event, the Prime Minister said he is hopeful of start-ups from the BIMSTEC region proving their mettle around the world.
PM Modi said that start-ups are also changing the demographic characteristic of business today. Today, women are directors in 44 per cent of recognised startups in India, and a large number of women are also working in them. Today, the youth coming from the general economic background are also able to bring their talent and their thinking to the ground. Its results are also in front of us today,” he said.
“Only 4 start-ups in India were in the unicorn club in 2014, but today more than 30 start-ups have crossed the 1 billion mark. Surprisingly, 11 of our start-ups have joined the unicorn club in the year 2020 as well. That is, in this difficult year of the coronavirus,” the Prime Minister further added.
Modi said that today more than 41,000 startups in the country are engaged in campaigns, in which more than 5,700 are in IT sector. More than 1,700 are working in the agricultural sector. This situation has been created in the last five years. Before 2014, only four startups in the country were in the Unicorn Club, whereas today more than 30 startups are in this club.