Skip to content
LATEST NEWS REGARDING RE OPEN SCHOOL IN GUJARAT
While schools in Gujarat, which have been closed since March due to Kovid, are preparing to reopen after the Diwali vacation, the session is likely to be extended by more than 50 days till the second week of June.As a result, exams will be held in the scorching heat of summer. Not only that, after the board exam in May, the standard 8, 9 and 11 exams may be held in June. 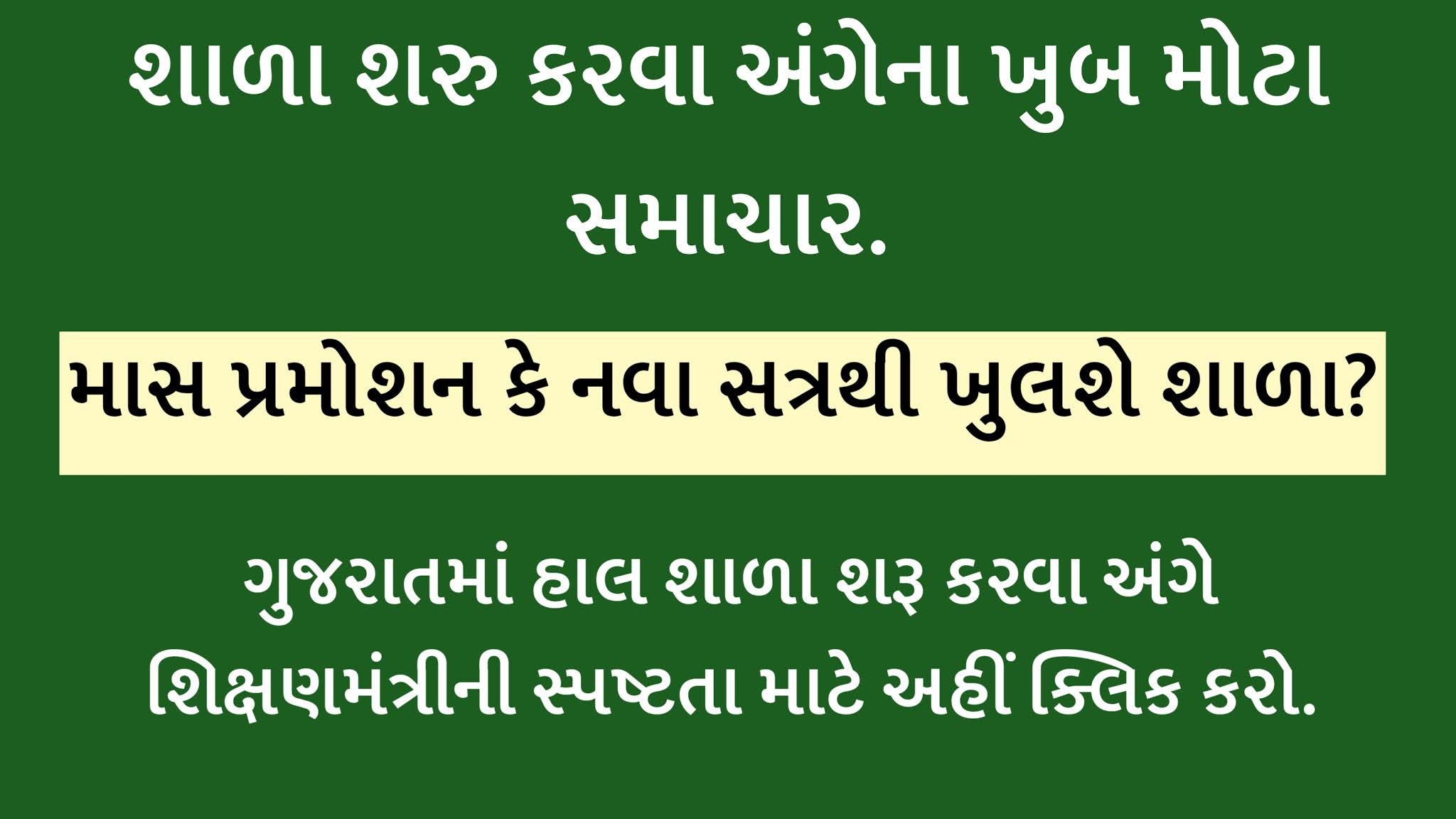 The second session can be as long as 50 days
The 21-day Diwali vacation has started in schools across the state. As a result, the government may start schools after Diwali and extend the second term by 50 days as the school did not resume in the first academic session this time.
The second session will be 150 to 155 days, as the time wasted in the next session can be compensated. The schools will open at the end of November, which means that the next five months will mean the end of May. The government is preparing to invite students from Std 9 to Std 12 to school after Diwali vacation. This year, Diwali vacation in Gujarat schools has been held two weeks early from October 29 to November 18.
Vacation two weeks early, a clear sign of school opening after Diwali
In Gujarat, schools and colleges have been closed for the last seven months due to Corona, students’ online classes are taken. This is why the first Diwali vacation in the state has started two weeks before the festival. This is a clear indication that schools may reopen after Diwali. The academic year of the schools affiliated to the Gujarat Board of Secondary and Higher Secondary Education is generally divided into two sessions. The first semester begins in June and lasts for 105 days. The session ends with a 21-day Diwali vacation.
Some parents-teachers made inquiries
Date of commencement of academic work in the school-college by the state government. Cavid-19 cases have increased since the 23rd announcement was postponed. In these circumstances, it has been decided to close the school-college. After this decision, no consideration has been given by the state government on whether or not to open a school-college. Some parents-teachers questioned the state government on this issue.
Government is not ready to open school at present: Source
Prior to this, knew the views of administrators and guardians before reopening the school, so be ready to get opinions on the process of getting votes from government administrators, parents or even administrators to open the school by 15 December No, top sources said. According to sources, at the current level, the government is not ready to do academic work in the school till December. Meanwhile, after reviewing the case of Kovid-19 for a month and looking at the status of the vaccine, it appears that the government is ready for further action.
Gujarat is included in the list of several other states, including Tamil Nadu and Rajasthan, which had quashed similar decisions and closed educational institutions after facing an increasing number of Kovid-19 cases in school students.
The government’s decision came late in the evening after holding a series of discussions with various stakeholders including college officials and schools
This time the program changed because of Corona
The Gujarat government wants to prolong the academic session after Diwali. Under normal circumstances the first session starts in the month of June and lasts for 105 days. The session ends with a 21-day Diwali vacation. Usually the 21-day vacation starts two-three days before Diwali and ends around Devadivali, but this time the schedule has changed due to Corona.
Because of this, students will have to go to school even in the heat of May-June. Normally, the board exams for Std 10 and Std 12 are held in March, May next year, while the annual exams for other standards, which were held in April, may also be held in June 2021.
READ FULL NEWS REPORT IN GUJARATI
READ TIMES OF INDIA NEWS FULL REPORT
COVID-19 has established a new normal of online learning. While it will never replicate the real school interactions, we must also consider that with the rising COVID-19 cases, the percentage of parents willing to send their children to school is still low, and therefore even if we restart schools, very few children would be attending. Case studies from many countries, including the US where 97,000 children came down with COVID-19 within 2 weeks of school reopening; and in Berlin, Germany, where 41 schools reported children or teachers getting infected last week are causing concern amongst Indian parents.
While many European countries have reopened schools, India has a very different demographic and hence we must remain extra cautious as we approach this consideration. Social distancing, micro study groups and strict SOPs need to be arrived at before we consider reopening schools. With the vaccines in sight, we should relook at the situation post the end of the year and then create a roadmap, keeping children’s health in mind.