Skip to content
Introduction of the Programme: –
For people who are living below poverty line & lower income group, an illness not only represents a permanent threat to their income and earning capacity, but in many cases it results in the family falling into a trap of debt. When need to get treatment arises for a poor family they often ignore it because of lack of resources, fearing loss of wages, or they wait till the last moment when it is too late. 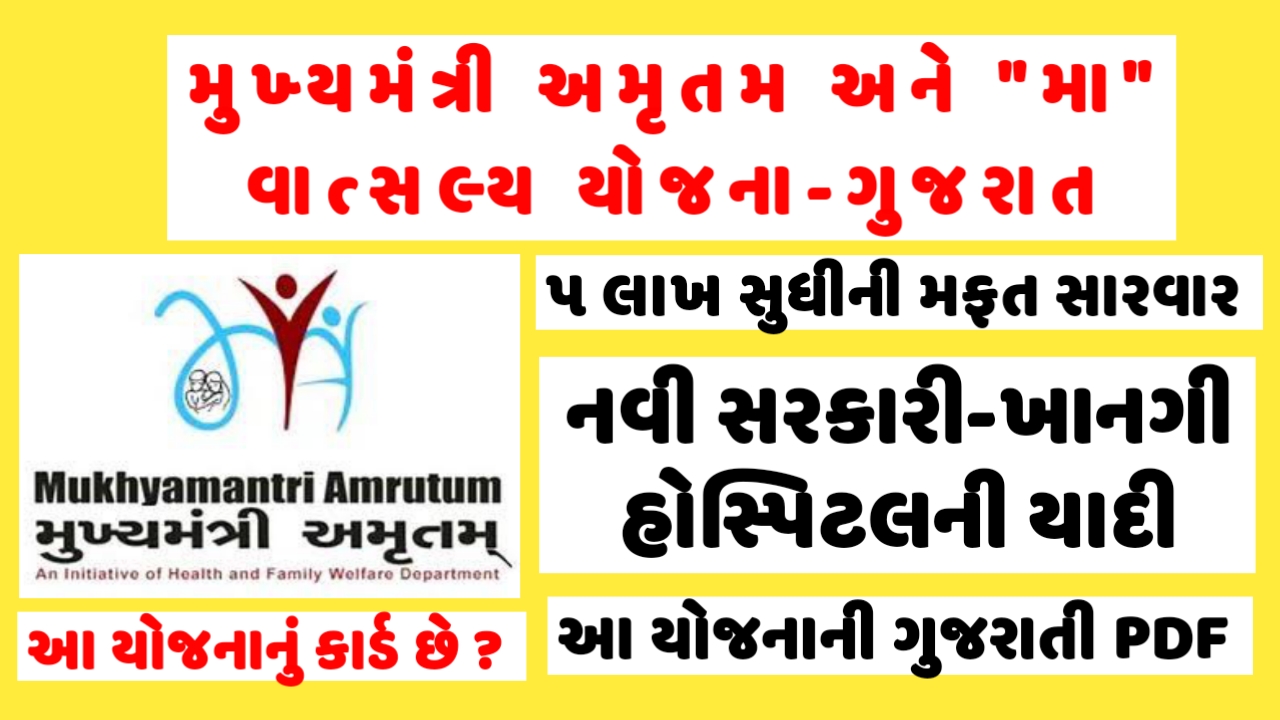 Health and poverty are interwoven. These families are Pushed into a vicious debt poverty cycle due to excessive expenditures arising out of catastrophic health shocks. To address this key vulnerability faced by the BPL population in the Gujarat, Mukhyamantri Amrutam “MA” Yojana was launched on 4th September, 2012 by Government of Gujarat.
When in the Lower middle class families, critical illness occur and when such families are not included in the definition of BPL so they cannot get free treatment, and they are not able to spend money for critical illness. So, Based on feedback from various stakeholders, the Scheme was extended to families of lower income group names as Mukhyamantri Amrutam Vatsalya Yojana in August 2014.
On 18/10/2017, the limit of income is been increased from Rs. 1.50 lakh to Rs. 2.50 lakh per annum for “MA Vatsalya” beneficiaries. On 01/04/2018, the limit of income is been again increased from Rs. 2.50 lakh to Rs. 3.00 lakh per annum for “MA Vatsalya” beneficiaries.
During year of 2016, U-win Card holders are also included under the scheme.
In Current Financial Year 2017-18, all urban & rural ASHAs (Accredited Social Health Activist), Reporters and fix pay employees of class-3 & 4 appointed by state government are included under “MA Vatsalya” Yojana.
Senior citizens of those families with annual income up to Rs. 6 lakh are included under “MA Vatsalya” scheme.
Strategies & Programme Activities: –
All beneficiaries can avail cashless quality medical and surgical treatment for catastrophic illnesses related to: Cardiovascular diseases, Renal diseases, Neurological diseases, Burns, Poly-Trauma, Cancer (Malignancies), Neo-natal (newborn) diseases, Knee & Hip
Replacement & Kidney, Liver and Kidney + Pancrease Transplantation which cover 698 defined procedures along with their follow ups.
The Sum assured is up to Rs. 3,00,000/- per family per annum on a family floater basis.
Kidney Transplant, Liver Transplant, Kidney + Pancrease Transplant procedures are covered with benefit up to Rs. 5,00,000/- under scheme.
Knee and Hip replacement procedures are covered with cap of Rs. 40,000/ – per one replacement. Additional cost will be borne by the beneficiary.
Rs. 300/- is paid to the beneficiary as transportation charges for every instance of availing treatment from the empanelled hospital.
To avail benefits every family has issued a QR coded card (Quick Response Coded Card). This card contains the photograph of the head of the family/spouse, a unique registration number (URN),
District name, Taluka name & Village name and the biometric thumb impressions of all the enrolled family members along with the details are stored on the central server which can be fetched online at the click of a button.
“MA Vatsalya” Card is compulsory for availing treatment. After availing Income Certificate, beneficiaries can get “MA Vatsalya” Card and for that
the following officers have been appointed to give income certificate to the beneficiaries:
District Collector, District Development
Officer, Deputy Collector / Assistant Collector, Province Officer, Deputy District Development Officer, Taluka Mamlatdar, Taluka Development Officer, Deputy Mamlatdar
Benefits to a unit of five members of the family (Head of family, spouse, and three dependents). A newborn is covered as 6th member of the family during that financial year.
There is no Insurance and hence there is no scope for any intermediary to make profits under “MA”.
There are zero direct costs incurred by the beneficiaries of MA Yojana as all costs of treatment, medicines, follow-up and transportation etc are borne by the State.
For beneficiaries enrolment, Taluka kiosks and Civic Centre kiosks have been established at the Taluka and City civic center Kiosk where beneficiaries can enroll themselves, can get his/her card split, can addition/deletion of family members, and can get a new card in case of lost card. Mobile kiosks are also provided at each district for growingly enrollment.
Private hospitals, Government hospitals and Standalone dialysis centers are empanelled to avail benefits under the scheme.
Payment against approved claims is released directly through RTGS by the State Government.
No intermediary agency is involved in the process.
For encouraging Quality services, Hospitals accreditation by NABH / JCI (Joint Commission International)/ ACHS (Australia) or by any other accreditation body approved by International Society for Quality in Healthcare (ISQua) are given Quality Incentives of 10% extra package change over and above the package rates.
IEC activities are also carried out. Under this, Mega Heath Camps are conducted in every district in which participation of empanelled hospitals, both private and govt. is necessary. In addition to Mega Health Camps, General Health Camps are also conducted by the empanelled hospitals every month. Radio and Print advertisements are given in local radio channels and newspapers to generate awareness about the scheme in the targeted population.
Rs.100 per BPL family is given to ASHA to accompany BPL family for enrollments at their respective Kiosk. Enrollment through Mobile Kiosk, incentive of Rs. 2/- per registration of “MA” & “MA Vatsalya” family is given to ASHA.

Selected private hospitals, government hospitals and standalone dialysis centers are identified to provide cashless treatment. The list of such network hospitals are:
Important Links
Mukhyamantri Amrutam “MA” & “MA Vatsalya” Yojana Details PDF
District wise government hospitals List
District wise Private hospitals List
Standalone dialysis center
MA website is www.magujarat.com
Toll free number is 1800-233-1022.
Scheme Features: –
(1) This is a 100 % State funded scheme where the fund directly goes to the service providers.
(2) To have healthy competition and not to replace public institutionsconsciously, it was decided to empanel both private and public/trust/Grant-In-Aid hospitals to render their services under ‘MA’.
(3) Package rates selected under ‘MA’ are derived from the market through competitive bidding process via e-tendering. Unlike from other states which went by the recommendation by Advisory Committee members in this Scheme.
(4) Implementation support agency(ISA): SNA is assisted in scheme management by an Implementation Support Agency (ISA) which is contracted to MD India Pvt. Ltd. through a competitive bidding process. ISA provides pre-authorization of all cases, and perform claim processing task. ISA maintains a call centre for grievance redressal, and does initial screening of hospitals for empanelment. ISA also hires Regional Coordinator, District Coordinator and Arogya Mitras(at hospital level) to manage the scheme.
(5) A dedicated state owned data centre and server is established with a storage capacity of 5 TB to deal with the voluminous data being generated. The IT Support Agency, (n) Code Solutions, is responsible for the development of software, enrollment of beneficiaries, setting up of Taluka kiosks etc.
Key Takeaways:-
Achievements: –